Technical characteristics of PROTAC technology in drug research and development

Most of the drugs currently in clinical use are based on small molecules and use an “occupancy-driven” mode of action to inhibit the function of proteins and play a role in the treatment of diseases. Different from traditional small-molecule inhibitors and antagonists, protein degrader technology has developed rapidly in recent years because of its ability to induce the degradation of pathogenic target proteins, providing a new idea for new drug research and development, and has become an important part of new drug research and development. A great weapon. Through the rapid development and relatively mature PROTAC technology at this stage as the entry point, we can understand the current hot protein degradation technology. 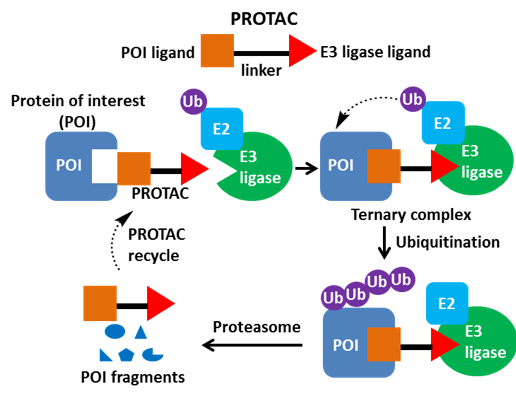 The concept of PROTAC (Proteolysis Targeting Chimeras, protein degradation targeting complex) was first proposed by Crews et al. in 2001. It can use the naturally occurring protein clearance system in the body to reduce protein levels rather than inhibit the function of proteins, and play a role in the treatment of diseases. the goal of. After 20 years of continuous improvement and development, PROTAC technology has become one of the hottest technologies in the field of new drug research and development, and is favored by scientific research institutes, pharmaceutical companies and investment institutions. PROTAC is a heterobifunctional molecule, one end of the molecule is connected to the ligand that binds the target protein, the other end is connected to the ligand of E3 ligase, and the middle is connected by a suitable Linker. PROTAC degrades target proteins through the ubiquitin proteasome system (UPS). The general process is as follows. PROTAC molecules bind to the target protein (POI) and E3 ligase to form a ternary complex, which labels the target protein with ubiquitination. , ubiquitinated proteins are recognized and degraded by the intracellular proteasome 26S. Advantages of PROTAC (1) Wider scope of action, higher activity, and can target “non-drugable” targets

Traditional small molecules and antibodies all use the “occupancy-driven” mode of action to inhibit the function of target proteins to play a role in the treatment of diseases. This mode of action requires a higher concentration of inhibitors or monoclonal antibodies to occupy the target’s activity. sites that block the transduction of downstream signaling pathways. The PROTAC is “event-driven”, which does not affect the function of the protein, but mediates the degradation of the target protein. As long as PROTAC mediates the formation of the ternary complex and tags the target protein for ubiquitination, it can theoretically be recycled and used repeatedly, so the amount of catalyst can play a role. Moreover, for proteins without active sites, such as scaffold proteins, PROTAC can induce related proteins to be degraded as long as they can bind, which can greatly increase the range of targets.

According to incomplete statistics, more than 100 proteins have been successfully degraded. These targets include

(4) Other proteins, such as MetAp-2, Bcl-xL, Sirt2, HDAC6, Pirin, SMAD3, ARNT, PCAF/GCN5, Tau, FRS2, etc. This includes “non-drugable targets”, such as transcription factor regulatory protein pirin, epigenetically related protein PCAF/GCN5, etc. In addition, according to a report by Nature in March, by the end of 2021, at least 15 protein degraders (including PROTAC and molecular glue) will enter clinical trials.

When it comes to non-drugable targets, RAS (KRAS, HRAS and NRAS) must not be bypassed. As the most commonly mutated gene in cancer, RAS is an important driver of lung, colorectal, and pancreatic cancers. After more than 40 years of discovery and research, no drug targeting this target has been marketed. Finally, in May of this year, the KRAS-G12C irreversible inhibitor AMG510 (Sotorasib) developed by Amgen was successfully launched, finally ending the “undruggability” of this target. Although the undruggability of KRAS was ended by small-molecule inhibitors, degraders remain promising at this target. For the KRAS-G12C mutation, Crews et al. designed and synthesized related PROTACs on the basis of KRAS inhibitors AMG510 and MRTX849. The activity assay found a degrader with good degradation activity, which may provide a new way to further conquer RAS. solution. It is foreseeable that the use of PROTAC technology may not only conquer G12C, but may also make a difference to other mutations.

Compared with traditional small molecule inhibitors, PROTACs can achieve selectivity on certain targets that is difficult to achieve with small molecules. For example, the multi-target tyrosine kinase inhibitor Foretinib can bind to more than 130 kinases, and Crews et al. used it as a ligand that binds target proteins, linking the E3 ligases VHL (von Hippel-Lindau) and CRBN (cereblon), respectively. The corresponding PROTACs were obtained from the ligands, and the results showed that the PROTACs linked to VHL and CRBN could only degrade 36 and 62 proteins, respectively, and only 12 proteins could be degraded by these two PROTACs. Another study by Gray’s group also demonstrated that PROTAC can achieve target selectivity. The 2,4-diaminopyrimidine backbone is a common backbone for kinase inhibitors, and inhibitors of EGFR, ALK, CDK, Jak and other kinases all use it as the parent nucleus. However, most of the drug molecules formed by this skeleton are relatively “dirty”, that is, the target selectivity is relatively poor, and they often have strong inhibitory activity against many other kinases. During the development process, the off-target effect of off target often becomes the main side effect. source, affecting the success rate of new drug development. Although the PROTAC synthesized by Gray’s group based on this skeleton can bind to more than 190 kinds of kinases, it can only degrade 12 and 22 kinds of kinases in cell experiments, which greatly improves the selectivity of targets. It can be seen that with rational drug design and repeated iterative optimization, PROTAC molecules with higher selectivity, better activity and better safety are likely to be discovered.

PROTAC technology can not only achieve selectivity that is difficult for small molecule inhibitors to achieve, but also has very significant advantages in improving activity. Taking BET (BRD2/3/4), the earliest target of PROTAC technology application, as an example, QCA570 discovered by Qin Chong et al. showed significantly better cell anti-proliferation activity than JQ1 and other inhibitors. Most of the activity was at the nanomolar level, while the activity of QCA570 was increased by three orders of magnitude to an astonishing picomolar level. Based on the excellent in vitro cell antiproliferative activity, the degrader also showed potent antitumor activity in vivo, and showed the characteristics of low dosage and low frequency of administration. This shows that PROTAC has obvious advantages in targets such as BET. However, no degraders targeting this target have entered the clinic, and the specific reasons are unknown. 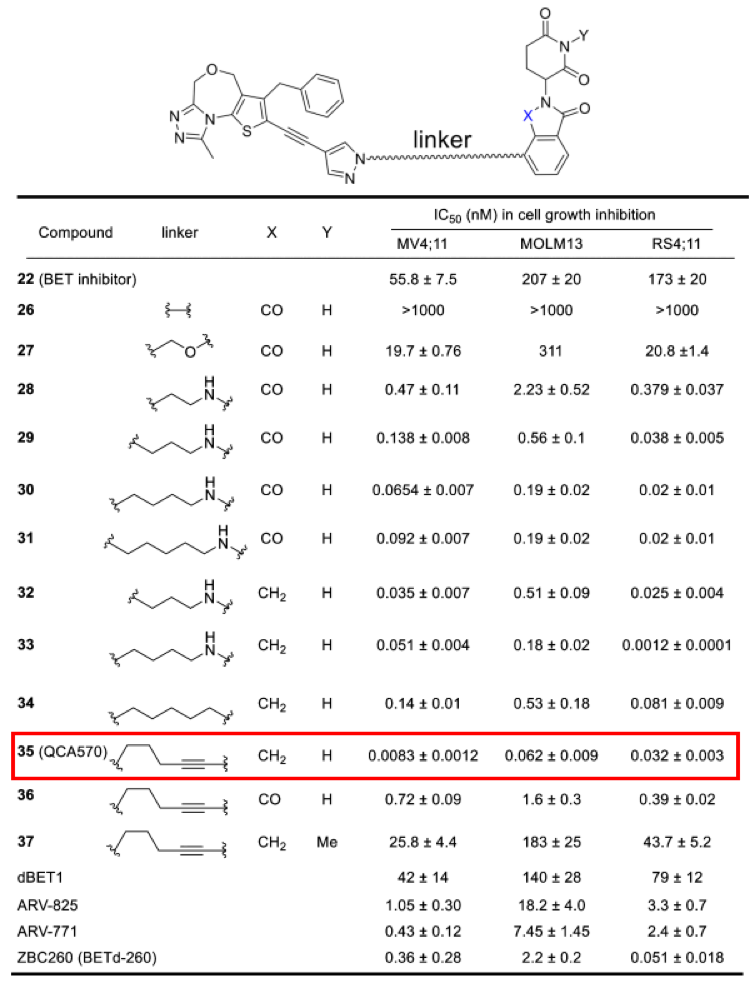 Acquired drug resistance will inevitably occur during the clinical drug use of small molecule inhibitors or antagonists. Such as EGFR-T790M and C797S resistance. Although resistance can be addressed by developing newer generation inhibitors, such as third- and fourth-generation EGFR, new resistances will emerge with the use of newer-generation drugs. PROTAC technology has shown certain advantages in overcoming drug resistance. Research groups such as Crews, Jian Jin, Zhang Sanqi, Ding Ke, and Gray have all conducted research on EGFR-PROTACs, aiming to overcome drug resistance mutations or find breakthrough inhibitors of protein degradation therapy through protein degradation pathways. It can be seen that the first, second, third and fourth generation inhibitors, as ligands that bind to the target protein EGFR, have all been used in the design of PROTACs. Among them, Gray’s research group also applied allosteric inhibitors to PROTAC, and achieved good results, which can selectively degrade different EGFR mutants, while avoiding the degradation of wild-type. This selectivity was further validated by in vitro anti-cell proliferative activity. 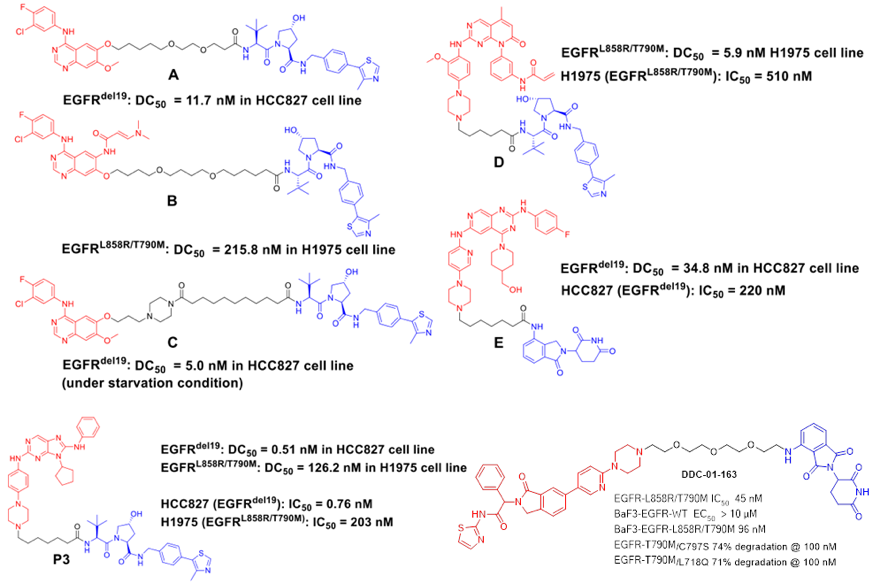 Recently, C4 Therapeutics announced its EGFR degrader CFT8919, which makes the fourth-generation inhibitor under development much inferior. CFT8919 has potent degradation activity against a variety of EGFR mutants, including the C797S drug-resistant mutation that is currently not available in clinical practice, and can avoid the degradation of EGFR wild-type. The in vivo xenograft model also verified that the degrader has good antitumor activity in vivo, and has little effect on body weight, indicating that its safety is good. Although the specific structure of CFT8919 has not been disclosed, it can be found by analyzing related patents that the EGFR-binding ligand to which it is attached is based on an allosteric inhibitor, and the E3 ligase ligand attached to it is CRBN-based. 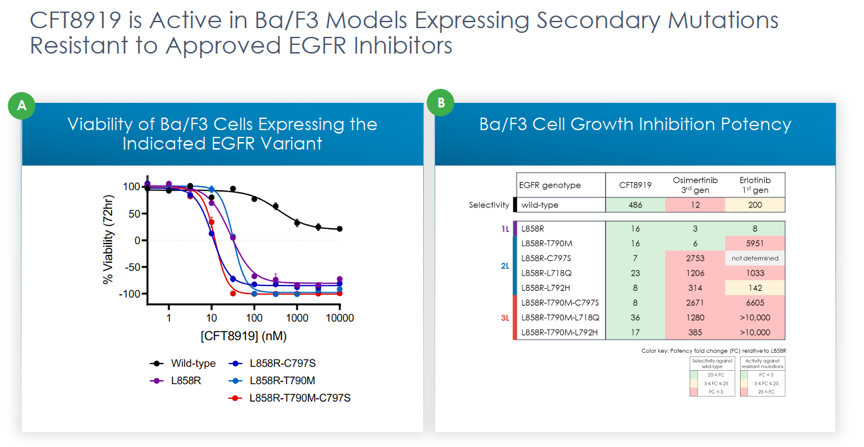 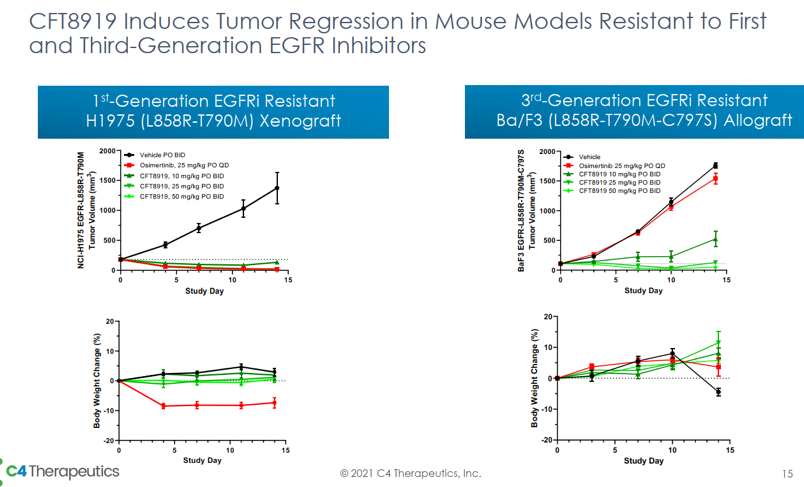 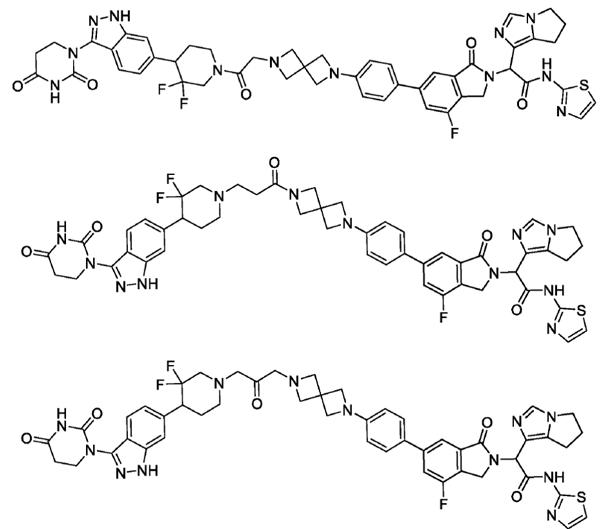 Coincidentally, PROTACs have also shown performance on other targets in overcoming drug resistance. For the BTK-C481S resistance mutation, the research group of Rao Yu and Crews obtained potent BTK degraders P13I and MT-802, respectively, based on the marketed drug Ibrutinib. Not only can degrade wild-type BTK, but also has potent degradation activity on BTK-C481S. This also provides strong support for PROTAC technology in overcoming drug resistance. 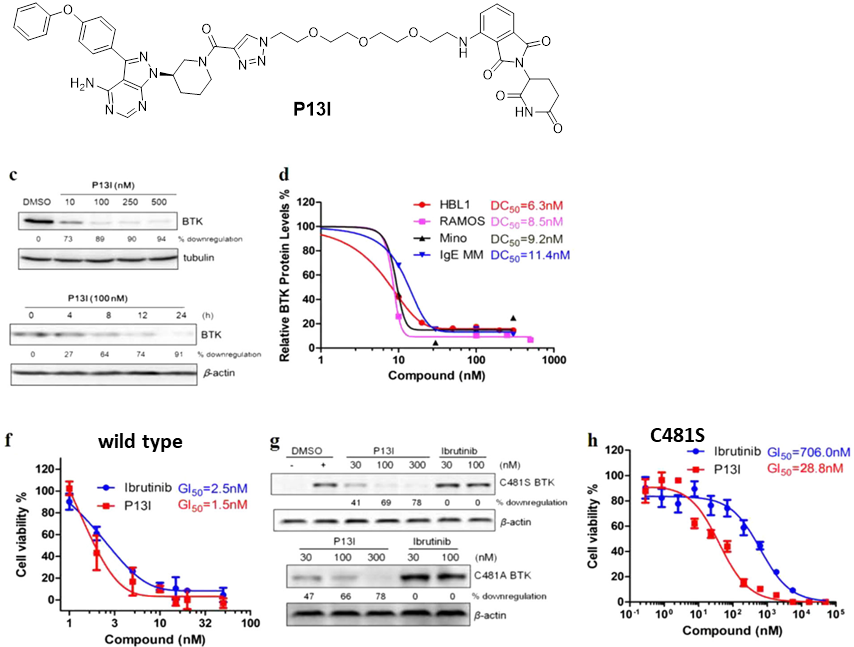 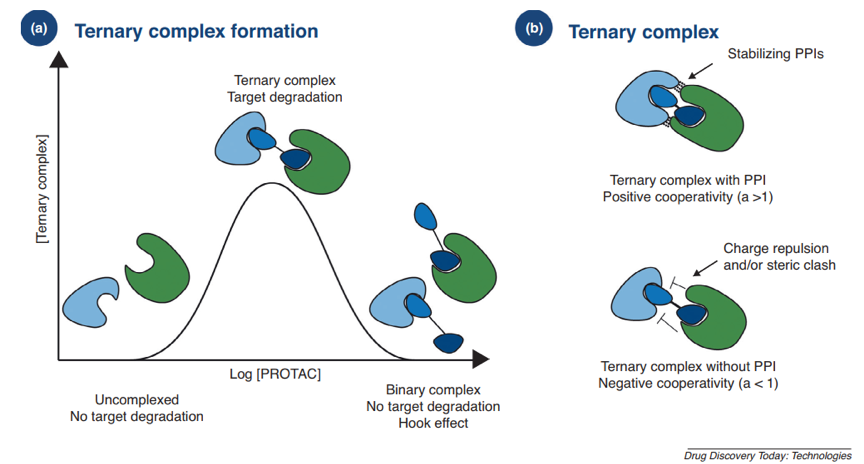 In 2017, Ciulli’s group solved the crystal structure of the first ternary complex BRD4-MZ1-VHL for the first time. The crystal structure revealed the interaction between BRD4 and VHL and the Linker of PROTAC and BRD4. Moreover, the positive synergistic effect of PPI was evaluated by various biophysical methods, and it was proved that this positive synergistic effect is the reason why PROTAC can induce the selective and efficient degradation of BRD family proteins. 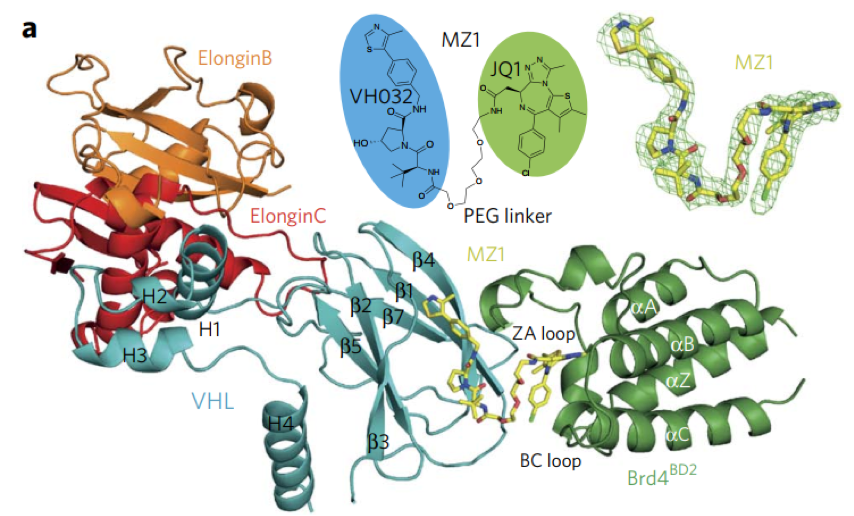 PROTAC has received extensive attention because of its unique advantages and mechanism of action. How to design and discover efficient PROTACs through an efficient evaluation system is the top priority of new drug development. Although many PROTACs have been studied and involve many targets, the structure-activity relationship is still not very clear. Starting from the structural characteristics of PROTAC, the main considerations for its design are as follows.

(2) Selection of E3 ligase and its ligands

According to the different composition of Linker, it can be divided into alkyl chain and PEG chain, and some literatures use more rigid alkynyl bis-piperidine ring, nitrogen atom-containing spiro ring or bridged ring as Linker to limit the flexibility and flexibility of PROTAC molecule. degrees of freedom. Existing literature reports show that the length of Linker will also affect the degradation activity of PROTAC, and the length of commonly used Linker is generally 4-15 carbon atoms (or heteroatoms). According to the different targets, the length of Linker has different effects on the degradation activity. In addition, click chemistry is often used in the Linker of PROTAC molecules to connect molecules at both ends due to mild reaction conditions and high efficiency. 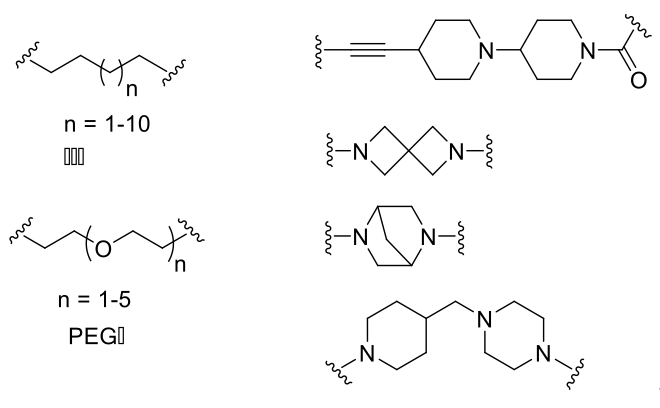 (4) The selection of the linker site and the structure of the linker The PROTAC structure connects two ligands through a Linker. In addition to the composition and length of the Linker will affect the degradation activity, the linker connection site will also affect the degradation activity, and even affect the degradation activity. Optional. The attachment site of the POI ligand and the E3 ligase ligand is generally in the region where the ligand is exposed to the solvent (marked in red in the figure, taking EGFR as an example). The connection site is generally connected by amide bond, carbon atom or heteroatom (such as O, N, etc.), etc., and the connection is realized by condensation reaction or nucleophilic substitution reaction. Recently, Michael D. Burkart et al. published an article in J Med Chem describing the role of linker design in PROTAC.

Tags:
PROTAC technology
Newer The Importance of Polyethylene Glycol (PEG) to the Pharmaceutical Industry
Back to list
Older What is SPDP Crosslinker?
close
Need help or have a question?
SEND US A REQUEST
1-858-677-9432